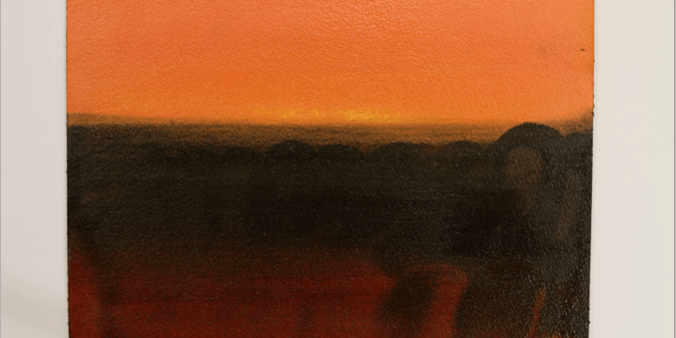 Once more, the writing angels and demons have been battling throughout the week, and another super-sized edition developed. Here are two scenes. The first where Waltzcrop’s assistants make another appearance, and the second where Waltzcrop acquaints himself with the island’s Mayor for the first time, startling him at his place of business, and, then, haunting his dreams. I hope you enjoy this new chapter . . . The story has lengthened quite a bit, and the players have been introduced, more or less. Please, let me hear from you. Your comments do keep me going. 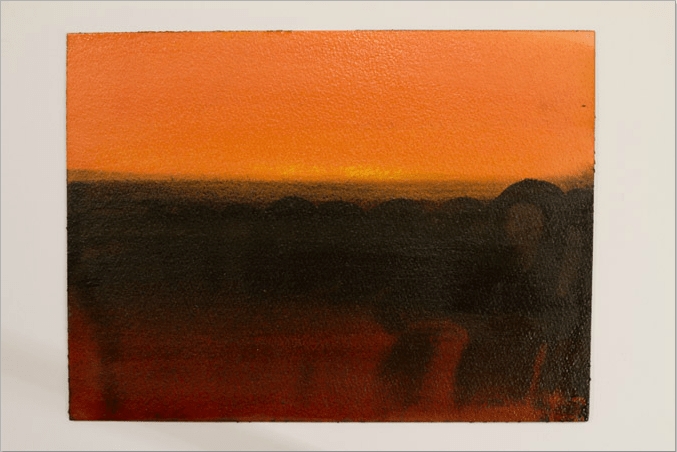 Another George Bogdanovitch canvas . . . this painting gets the waxen appearance of Waltzcrop just right.

By Thursday evening, most residents of Fidalgo Island concerned themselves with getting through the day. They looked forward to the weekend. Each morning, Roger had clocked in at the ferry terminal booth and sold tickets to Orcas Island and Friday Harbor, smiling at all the locals and tourists alike (fewer these gray storm-clouded days, but the crowds came and went all the same).

Morton and Sally, twined in a pact of secrecy, met each evening in the late midnight hour, coupling roughly, silently, under the eaves, the pocking sound of raindrops on Sally’s metal roof accompanying their lust. They both went to work raw. Thursday morning, someone asked Sally why she was limping, and her face grew red as she lied and then walked away as if under a spell.

Even without the play in hand, Martin Belloon spent his nights reciting memorized portions of the play, acting out scenes with his wife, who grew more and more worried with each passing moment since she couldn’t remember the dialogue very well and didn’t know why, or how, her husband seemed to have the entire play juggling around in his head after only a few readings. Finally, grown weary, she’d say, “I’m not one of your actresses. Stop this!”

“Discipline, a clear mind, serenity on the inside. No one should ever be aware of the human inside, the actor simply acting, especially while up on stage . . . your disbelief must be corrected,” Martin Belloon said before dragging Carole to their marriage bed, and handcuffing her to the bedpost (after a quick google search, the cuffs had arrived next day air from a reliable online business). He’d wipe off all of her makeup with one of the pricier white towels, and then viciously have his way with her—she no longer protested anything he suggested.

Many other denizens of Fidalgo Island fed their kids dinner, chatted with friends about the rainy days stacking up, the weathermen proclaiming no sky clearance in the near future—think we’ll break a record for wettest November this year?—picked apart the arguments made by talking heads on the local and national news, and, usually, with more than a bit of disgust, changed the channel over to a game show, where they could play along, one second behind, thinking: I knew that. On the island with over sixteen thousand residents, only a miniscule portion of them had anything to do with the theater, had direct contact as a volunteer, an actor, actress, stage hand, costumer, ticket seller, enthusiast. All the better for Mr. Frederick Waltzcrop, who’d been away most of the week, leaving preliminary duties to Camoustra and Frenalto, keeping Gerald Pommeroy busy in his home. Planning. Earlier in the morning, during a lull in the rainfall, they made Gerald dress down to his saggy boxers and stand on his front stoop in a thoughtless state, turning in circles, and Camoustra, after several neighbors passed by in cars, gawking, or walked down the sidewalks with their dogs, umbrellas shielding them, played her part.

“Uncle! What? What are you doing out here? Come back inside.” Frenalto then appeared and they shrugged their shoulders at the neighbors, told them how sad and diminished Gerald had become, the dementia strengthening, finally steering Gerald back inside behind the castle walls.

Mr. Gerald Pommeroy’s mind had snapped hours, days, ago, and he willingly followed Frenalto’s orders, limping down to his basement air mattress. Camoustra and Frenalto could hear him mewling in the darkness.

“Next time you’re passing by, Sweetie-Darling, mind closing that door?” Frenalto snapped over to shut the basement door with a wide grin. He’d been pleasing Camoustra for so long now, it was second nature.

“Do you think we should check in with Kate? She’s so energized.”

“Soon. Maybe this weekend. After she’s read the play. Don’t let your impatience get the best of you. We have plenty of time.”

“Being neighborly, Frenalto, is always the highlight of my life.”

“Just don’t believe she’s one of the strongest we’ve ever coddled.”

“Denisov will perform suberbly. On Friday, maybe we’ll pay a first visit to this Leonora—sort her participation out. Frederick will return tonight. I’m sure. Leonora’s the big unknown. Maybe we can ask her to show us homes for sale around the island, procure her services, set up the first ceremony. Kate and Leonora will devour each other.”

Frederick Waltzcrop opened the café’s doors after shaking the raindrops off his umbrella. He placed it in a ready stand inside the door while doffing his hat—stringy combed-back dark walnut hair thinning and running back around the egg-shaped dome. There was a stand to the left of the entrance and Waltzcrop’s large black coat soon hung there, dripping water onto the old wooden floors of the large room filled with tables and chairs, a few large-cushioned sofas. All of them were empty.

A tall, brawny, man stood behind the espresso counter holding a push broom. His first thought? Who’s this pointy-headed guy? He wasn’t a huge gossip. He enjoyed a good story; it came with the territory, the coffee shop scene, but he also knew how to keep confidences. Mostly, he listened and loathed idle gossip, especially if it would intentionally or unintentionally hurt another person. He kept his judgments to himself. Later, to his wife, he wouldn’t even describe Waltzcrop as having the strangest, pointiest cranium he’d ever seen on another human being. His skin’s so . . . waxy, wax-like, the color of beef tallow.

He shook this imagery away and went back to work. Closing, blessed, in ten minutes time and he needed to do a bit more cleaning.

“We’re only open for a bit more, but I can get you a glass of wine or a cup of espresso if you’re up for it,” the man said to Waltzcrop.

“Please. An Americano. Extra hot water, please. So kind of you.” Waltzcrop studied the local bulletin board. He read every notice as he came closer.

The man behind the counter was also the newly elected Mayor of the island town, William Jackson. He owned Picasso Joe’s, the third coffee shop in the downtown area that wasn’t part of a chain. It became a wine bar in the evening hours—framed Picasso prints covered the walls above decorative wine barrels and comfortable chairs. William, or Big Bill to most of the locals, built a small stage in the corner of the building that used to be one of the town’s old drugstores from the twenties to the early nineties, when other chain druggists opened for business in the commercial district. Big Bill Jackson was an imposing figure around town, but when people met him, or simply observed him at work, pulling espresso shots, they soon thought of him as a big softy. Healthy, he followed an organic diet and encouraged an active lifestyle with his kids and his wife, whose family had a history of diabetes. He reached a height of 6 foot 5, and, towering over customers, became a fixture in the local barista movement well before any political ambition settled into his mind.

It isn’t a secret that Jackson wanted more of the island’s populace to discover Anacortes after dark. The town had a reputation for closing its doors at 5:30pm, the last locking up by 6:00, the seniors tucked in at home watching the news, families eating dinner at home, the slightly more adventurous seeking out an art film or a local theater experience. Big Bill had many ideas, and understood the need for family time, what with being a husband of fifteen years himself, with two teen girls and, the youngest, a ten-year-old boy in the school system, the happy family smiling out at everyone during the last mayoral campaign. His wife, Jeannette, created chocolates that the shop sold. Inspired, these tequila lime, cinnamon blast, and marshmallow dark chocolate truffles enticed, gem-like, behind an antique curved-glass display case to the left of the large Italian espresso machine.

“Frederick Waltzcrop. You can call me Frederick, if you please. I’ve heard so much about your shop.”

Waltzcrop handed over a twenty, and, after receiving his change, placed the crisp ten-dollar bill in the glass tip jar on the counter, and then neatly arranged the rest back in his black leather wallet. “For your troubles this wet and dreary evening. I also heard you’re in politics. Help the village manage itself.”

“Yes.” William Jackson let out a short laugh. He didn’t mind strangers knowing who he was, but it unsettled him nevertheless. He thought of the generous tip. The odd kindness of strangers always surprised him.

“I’ll just let you go about your business, finish this up, and be on my way. Please, don’t mind me. I may be old, but I’m new in this town. Just getting to know what’s available at all hours of the day and night.”

“Well, thank you. Enjoy the coffee.”

Waltzcrop settled onto one of the sofas and placed his cup on the side table. He hummed an old tune, with few notes, so softly William Jackson couldn’t hear it.

Over the next fifteen minutes, Waltzcrop observed Jackson, every action taken, the washing of the countertops, tables and seats, chairs placed upside down, the cleaning of the espresso machine and dumping of the final grounds into a proper container . . . the locking of the front door after the OPEN/CLOSED sign was flipped.

“I believe I’ll get out of your way. Let you get home to your family.”

And then William “Big Bill” Jackson was alone in his shop once more. The front door locked against the rain. He’d go home, kiss his wife, and dream of waxen skin stretched tight across ancient bones.

To read the next chapter of The Play (The Queen’s Idle Fancy), simply click HERE for Part 11!

And that’s a wrap for this week’s edition of The Play (The Queen’s Idle Fancy) . . . setting up a theatrical production does take a lot of planning! 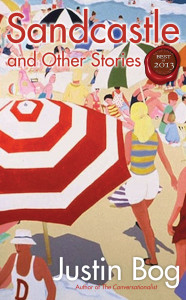