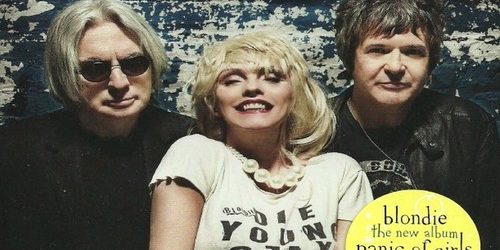 Mother may I stay all night
Lift your curfew like the light
– from the latest Blondie single Mother.
Inside the new Blondie album artwork (I can’t stop calling CDs/Downloads albums!) for Panic of Girls there is a quote from Cullen Hightower: ‘we experience moments absolutely free from worry. these brief respites are called panic.’ 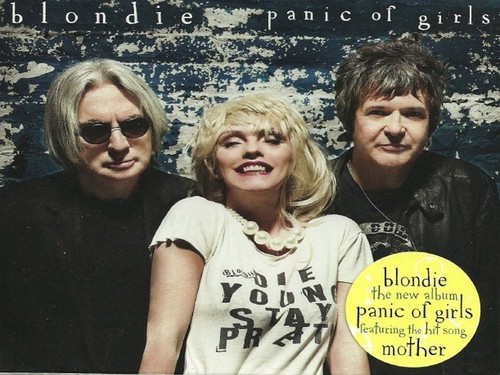 There is no song called Panic of Girls, so I had to guess at the intention of the album title. I like how the meaning, pulled from the Hightower quote, can be found in the lyrics and tonal qualities of the music. Deborah Harry, an icon in the music industry, radiates classic style. With singular brazenness, she wears a vintage Blondie Die Young Stay Pretty t-shirt in the photo art of the outer-sleeve CD cover. Several of the songs hearken back to her Eat To The Beat days; it’s as if she’s in on some joke she’s kept hidden from the world, but can’t help teasing us about wanting to figure out the riddle.

When I heard about Blondie regrouping with new members I exclaimed ‘Yes!’ and immediately had to tell another Blondie fan from way back in the day. His response was more droll: ‘Really?’

But there was a wistful smile on his face. Panic of Girls has that tone of wistfulness and it’s on display throughout the set of eleven songs in an honest and nostalgic way. 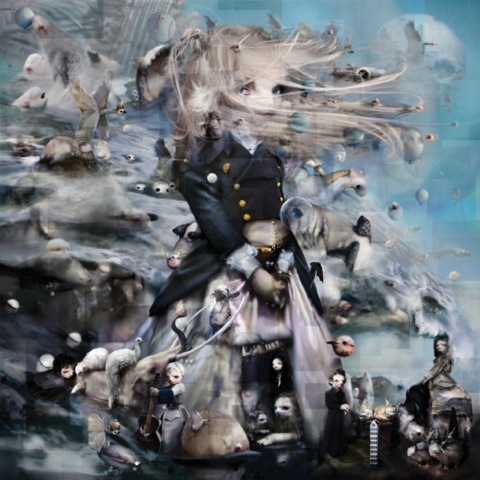 Singer Deborah Harry, guitarist Chris Stein, and the third original member, the beating heart of Blondie, drummer Clem Burke were joined by musicians, Leigh Foxx on bass, Matt Katz-Bohen on Keyboards, Tommy Kessler and Paul Carbonara, both on guitar. Panic of Girls was produced by Killers producer Jeff Saltzman and My Chemical Romance producer Kato Khandwala added his own touch later in the recording process.

My favorite Blondie album is Eat To The Beat, with Parallel Lines, and Autoamerican rounding out a very strong string of albums from the late seventies and early eighties New Wave movement. In more recent times only the terrific single Maria, from the No Exit album, came close to those early smash hits. Panic of Girls is Blondie’s 9th studio album and the 1st since 2003. Does Deborah Harry bring that same Blondie sound? Yes, and although her voice is now suitably weathered, in a good way, it works since she’s singing many songs about distant times, the end of love, or risking love again.

On the first track, D-Day, I was happily back in familiar Blondie territory:

Cause now it’s D-Day
I’m ready to invade… opens the album with a killer new wave romp, the best tune of its kind since Atomic. When Deborah Harry sings And swear your love to me you can’t help but obey. D-Day sends a message of fun, a challenge to join her and the band, and this continues in each of the next ten tunes. In the chorus, she’s flirting once again with her fans who love her singular, wry delivery:
Make a mess of
your last love
transfer your love to me
all the while repeating the catchy riff Debbie Devil don’t you dare in the background.

D-Day segues wonderfully into What I Heard where Harry now tells a boy off for cheating on her but still wants part of the crazy. In what should become a timeless Blondie off-kilter break-up song, Harry wonders what she heard, as if she hopes it isn’t true and is growing anxious as the beat escalates. What I Heard could’ve come straight from Parallel Lines, which showcased one of the best paranoia songs of the last era, One Way Or Another.

Mother is the first single, and it has that soaring vocal chorus. She sings about a night club in NYC that has long-sinced closed, and plaintively asks: Where are all the missing children? In the video to this song on YouTube, she recreates the club, sings there up on stage while zombies slowly enter the club to turn the crowd into monsters. We get one possible answer to her question: We are all older, we’re no longer club kids, and the end is in sight. Seeing Debbie Harry in zombie make-up is a hoot!

This theme of decay is brought fully forward in the next song The End The End, a song about a possible coming apocalypse for all the lonely people. It is one of three reggae songs on the album, and the most like The Tide is High from the similarly reggae-tinged album Autoamerican.
Harry sings: I see all the lonely souls
You’re my one and only –– and brings listeners closer to watching the end right beside her.

Girlie Girlie, the next tune, is a cover of an old Trojan Records Sophia George reggae song, but this one is upbeat and silly. Girlie Girlie is a list song about a young man with girls all over the world that captures the style of singing from Rapture.

In Love Doesn’t Frighten Me the weathered quality now in Deborah Harry’s vocals hovers torch-like in the background, which allows the band to take center stage. Finally, the song’s simple structure is about the chorus line soaring over grinding guitars and drums. This song stays true to that kiss-off Blondie attitude.

Words In My Mouth then slows things down with Harry’s hypnotic singing of old as she implores: Don’t put your words in my mouth. Something every singer should listen to.

Sunday Smile is the third reggae tune, a Beirut cover. It reinforces the album’s theme, how short our lives are, and reminds the listener that brief respites are called panic.

On Wipe Off My Sweat Harry, especially in the chorus, makes the song sound so much like a found Kirsty MacCall song, as if it was a lost tune from her terrific Tropical Brainstorm album. This track is good, positive fun with a Latin beat telling people to not stop for anything at all.

Harry switches to French for Le Bleu, an inspired Serge Gainsbourg-like tune. I don’t speak French but the tone, spoken word at times, fits the rest of the album.

Fittingly, Blondie saves the best tune for last, which also could fit into the Eat To The Beat era. In China Shoes Harry’s calling out not to be forgotten by a loved one:

I left a note on the back page of your book
volumes away but it’s worth a good look
remember me, remember that you’re mine
remember me when you get to the last line

After listening to Panic of Girls it’s impossible to forget Deborah Harry’s voice, and her iconic delivery. She’s the same wily flirt. The band brings new soundscapes to their sound, tweaks enough of the guitar riffs, the drum beats, to forge new ground while keeping older fans happy. They have been very productive of late and the rumor is that they’ve been inspired enough to work on a followup album. I hope you enjoy Blondie’s new music as much as I do, and, as Deborah Harry says: (it’s) worth a good look!

Panic of Girls is available exclusively at Amazon. I’m off to finish reading an intriguing book, write some of my own novel’s chapters, and later catch up on my new favorite show, Revenge. Best,