In Malice, Quite Close by Brandi Lynn Ryder — A Recommendation 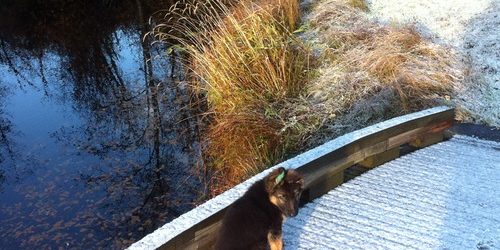 The chill of finishing a great mystery is in my bones. And it’s a very good thing Kipling can’t get to them with her tiny puppy-teeth!

She slipped a bit and I loved Zippy’s watchful eye (here he’s laughing at Kipling)!

The view from the bridge and back to the house with Mt. Erie in the background…a daily walk for Zippy and Kipling. Now for the book recommendation, please enjoy:

This is my apology.

There is no other word for it. It is a true account, but it’s my truth alone. I tell you this at the start, for while I regret the end, I will no doubt justify the means and this must not move you. I have come to see I’m incapable of drawing clear moral distinctions. For me the question of what can or cannot be done has never been an ethical one. There is no line I cannot smudge with my thumb.
— opening from In Malice, Quite Close by Brandi Lynn Ryder

When I begin to read a debut novel, the very moment fills me with the most anticipatory thoughts, and, especially curious in a story that comes with such high praise and the promise of a scintillating journey to different, unexplored places. In Malice, Quite Close, by Brandi Lynn Ryder, is a hardcover published by Viking. I read up on the wonderful background of the book. From writing to publication, the author went through her own gauntlet of heroic tasks to see this gothic mystery take its final published form, enduring the long editing process, and submitting to contests. Years in the making, it’s a knockout home run.

I hope I can do my little part to share the news, promote the intricate narrative, and reveal the lush writing of Brandi Lynn Ryder. The cover art alone intrigues me, and the bonus is that the novel deals with art and the creation of art; also madness, since no novel about artists is ever complete without touching on a certain compulsive insanity. As most of you who read my Posts know, both my mother and father were artists (and my dad’s still creating). They met in grad school in Iowa, both following their creative muses. Growing up, the thrill of a gallery opening was an almost yearly pleasure, especially as kids, because all five of us Bogdanovitch children knew there would be cool, fancy people attending, and really good art-crowd food (Mom? What’s uh whore’ derve?) And even that statement fits into the intricate set-up for In Malice, Quite Close, where there is a gallery opening for an artist who may or may not have painted the surprising nudes that capture the secretive nature of one of the main characters.

The writing is layered, assured, and direct, while also being rich in detail. Brandi Lynn Ryder is a writer to watch. Her novel was a finalist for the 2009 Amazon Breakthrough Novel Award. The judges, Sue Grafton and Sue Monk Kidd among them that year, became spellbound by her intoxicating prose:
Luke stepped in from the terrace. Escape. Escape. It beat in his brain, sounded in his ears. But there was nowhere to hide here. Walking quickly through the darkened sitting room, he felt his head spin, awash with half-formed thoughts and undefined sensations that told a single story, like how the scent of jasmine made him think all at once of the river in Virginia where he’d lived as a child, and his father’s brooding frown, and his mother dying, and his first kiss, and a dirty novel he’d read when he was twelve and hid in a hollow tree trunk covered with moss: longing, loss, and loneliness like a cloud of mosquitoes buzzing at once.
Ryder chose to begin her story at the beginning and tells it chronologically, with a few great flashbacks. Some famous people say to always begin in the middle, at the most exciting moment; then backtrack and reveal secrets in scandalous fashion. This is a murder mystery wrapped up in a confessional. The murder doesn’t even happen until halfway through the novel and it is richer for having this structure because by then I cared deeply for all the characters, even the despicable ones, and this novel has those in spades.
Tristan Mourault is a complex and rich character who you will rightly despise the first time he is introduced. There is little redeeming him, and this is part of the gothic storyline. He’s the heir to a rich art fortune, and what he sees he covets, and prepares to take. On a trip to San Francisco he sees young Karen Miller and begins to stalk her. Then, over meetings she believes are coincidental, Karen is placed under Mourault’s spell. There is a kidnapping, a change of identity, and then, the author skips ahead many years later. Karen has now become Gisèle, a wealthy woman, and is married to a different man, someone with little ambition, someone easily deceived and who only sees dollar signs. Tristan lives in the same huge mansion, foots the bill for everyone, and is now in place as Gisèle’s grandfather. There is also a granddaughter, Nicola, approaching the age when Tristan first spotted Gisèle/Karen, and this is a major part of the intrigue. How could it not be? There are many gothic touches, hidden rooms, see-through mirrors, double identities, letters delivered to the wrong person, blackmail, on top of the rather squeamish main character’s proclivities. Ryder makes it all come together like the best of fine puzzle-boxes. I wanted to understand Gisèle’s motivations for staying with Tristan and the answer remains a mystery until the paintings are discovered after being kept hidden away in a room for years.
I love books filled with dark secrets. I also especially love books set in Washington, my home State. Devon, the fictional mountain-town setting, with glacial lakes, and a rarified University, is a gathering spot for the wealthy art crowd. The characters come to Devon to escape their pasts. By the time one of the most prominent residents of Devon is found floating in her swimming pool, and everyone starts to believe it wasn’t just an unfortunate accident (Gisèle was deathly afraid of water, and everyone knew that), I couldn’t stop turning the pages fast enough to find out whose dark desires led to such an act. You’ll love the book’s tangled-vine narrative too.
At last Nicola spoke. “Why was Mom so afraid of the water?”

“Ah. The worst fears have no rational cause mon chaton. It was simply always with her. I did try to teach her to swim once.” His eyes were fixed on a point beyond her, on a picture from a past she could not share. He gave a short, sad laugh. “She was like a cat in the bathwater. Within two minutes she was out again. Phobias are strange, crippling things. Like obsessions, I suppose. Addictions. There are things that choose you; they are not chosen, and not so easily abandoned. I know this from experience, Nicola.”

Place In Malice, Quite Close under your Christmas tree as a gift for mystery lovers. There is another great read on the horizon. If you haven’t read Haruki Murakami’s new book 1Q84, there’s no better time. It is my pick as the best book of 2011. Ask for this one for the holiday. Murakami threw the contents of his kitchen sink into this novel, and 1Q84 should be on everyone’s favorite-novel-I-just-read list soon enough. Murakami’s main character, Aomame, a young woman, goes on a mission in Japan. She simply walks down an emergency ladder and into a world slightly different from the one she thought she lived in. If you loved The Girl with the Dragon Tattoo, as I did, you’ll follow and be amazed by Aomame and her equally intoxicating journey.
Best to you as the holiday approaches,
Justin
Find In Malice, Quite Close at all book outlets and remember to try to support your independent bookstores.
Discover the best tips in Travel, Leisure, & Entertainment at the new online magazine In Classic Style!
Please subscribe to a writer’s life &
Follow me on Twitter @JustinBog
Categories: Novels, RecommendationsNovember 29, 20111 Comment
Tags: artartistsbooksbridgescreativityin classic styleislewood farmkiplingmysterynovelspsychologicalrecommendationssuspensewashingtonwriterswritingzippy
Share this post
TweetShare on Twitter Pin itShare on Pinterest Share on FacebookShare on Facebook Share on LinkedInShare on LinkedIn