Stories for Nighttime and Some for the Day by Ben Loory — with obligatory Kipling & Zippy photo! 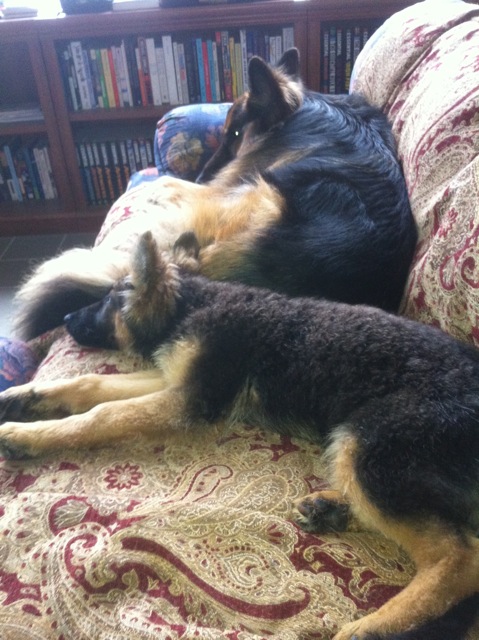 The young man has never been afraid of hats before. In fact, he’s recently found himself admiring them. The hats on the heads of the men in this town have actually seemed to him quite marvelous.

So it is strange that he should now be so frightened–so incredibly frightened–of this one.
— from Ben Loory’s The Hat 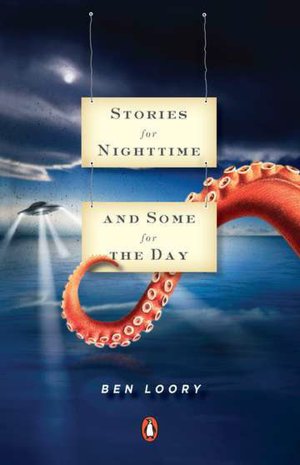 Ben Loory is one unique fabulist, a writer of contemporary fables and witty oddities set in a slightly-skewed universe not so unlike our own. In his debut collection of 40 tales, a Penguin Paperback Original, Stories for Nighttime and Some for the Day, animals live out their lives as neighbors and friends to humans, visitors from outer space make sojourns to our planet and bump shoulders with members of the populace, and an inanimate object, an entire home in one fanciful tale, befriends the sea. Most of these very short tales are psychological, window-opening peeks into lost and found souls. Some of the stories are only a paragraph or two in length and even these ask heavy philosophical questions based on flights of fancy. In one page-long, clever tale, Loory honors Ray Bradbury! He begins this story with the line: A man jumps off a cliff. I pondered these stories for nights and days after reading them.

The television thinks it knows better than the family that’s sitting there staring at it.

Why do they watch this garbage? it thinks. It’s so empty — so stupid, so dumb.

So the TV decides to stop showing the family football and game shows and soaps, and instead it shows them only educational programs. Mostly opera, and shows about Churchill.

The family, on the other hand, does not.

Why does it only show opera? they say. And what’s with all this Churchill stuff?
— from The TV and Winston Churchill

The economical writing makes me feel as if I stumbled across a secretive stash of poetic tales written only for my enjoyment. Because of Loory’s masterful conjuration, every precise word he places in the narratives acts like a world-weary, yet determined, salmon swimming home upstream; his salmon leap past hungry grizzlies and then suddenly spot Bigfoot on the river’s shore, where, in the next moment, UFOs may land and doorways, perhaps, open — every nuanced phrase becomes important — and even an inanimate object, a rock on the shore’s edge discovered by a duck, is known to come alive. There is no waste. Many of the tales have open endings, which enhanced the thrill in each adventure, and allowed the end-of-the-story vacuum to be filled by my trying to understand the morals left behind. Along with empty boxes, monsters on the loose, people who learn the gift of flight, or grapple with their own violent tendencies, as in the very powerful story, The Snake in the Throat, you’ll ponder how human the messages are, how relatable — a truly remarkable gift from the author, who also doesn’t beat the moral of any story into the reader’s mind.

Here is the playful book trailer for Ben Loory’s first collection:
The Peculiar Pretzelmen created the perfect background music!
About the author: Ben Loory was born in Dover, New Jersey and graduated Magna Cum Laude from Harvard. He later attained his MFA from the American Film Institute and as a screenwriter has worked with the likes of Jodie Foster and Alex Proyas. His fables and tales have appeared–or are upcoming–in such widely varied publications as The New Yorker, ESPN The Magazine, Space and Time and The Antioch Review. In November 2008, his story Photographs was a finalist for the Glimmer Train Short Story Award for New Writers. He lives in Los Angeles, in a house on top of a hill.

And then the boy sees that she’s an old woman, just as he’s an old man. And the two of them are wearing their wedding rings, just as they always have been.
Oh, says the old man, I must have dozed off.
It’s okay, says the woman, it’s late.
And the two of them kiss and pull up the blankets, and hold each other through the night.
– from The Ferris Wheel

I hope you find Stories for Nighttime and Some for the Day as enjoyable and fun as I did. I reread several of these stories just to see how they were constructed. Most, like the best puzzles, did not reveal the answer to the writer’s riddle. This book also made it onto my list of the best books of 2011 — and that list is coming soon! Please, check out Ben Loory’s writing and have a very Happy New Year!