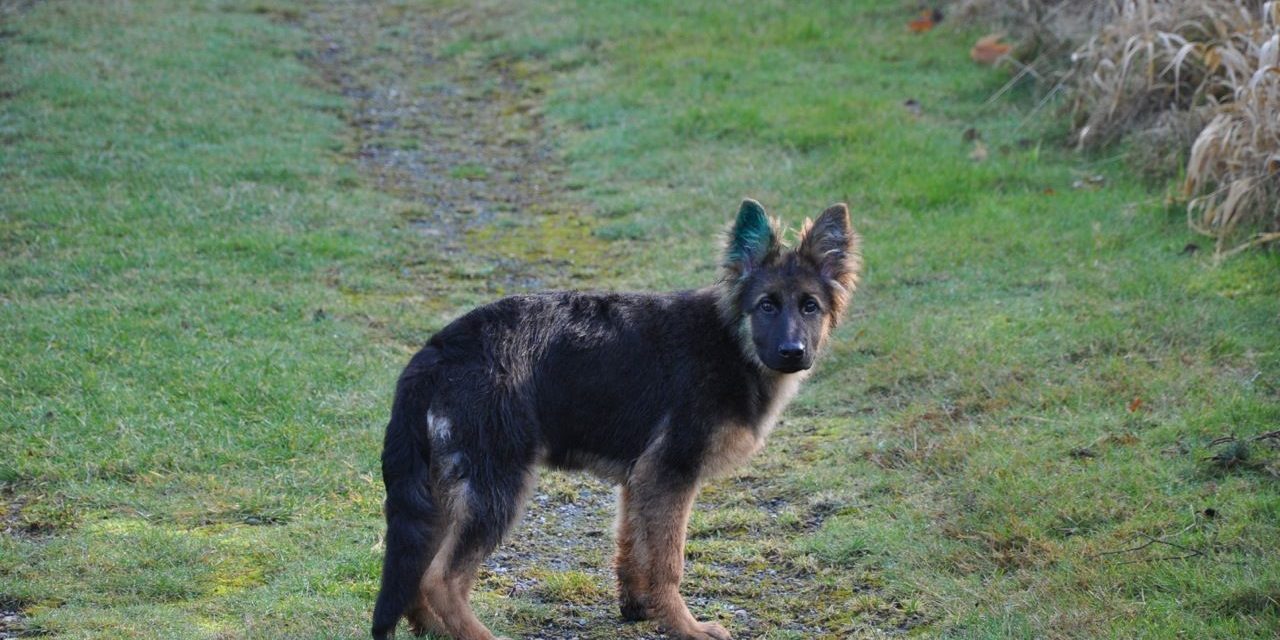 Kipling turned the ripe old puppy age of 4 months. She’s now 31 pounds and gets her last shots this afternoon. She’s at that awkward stage . . . 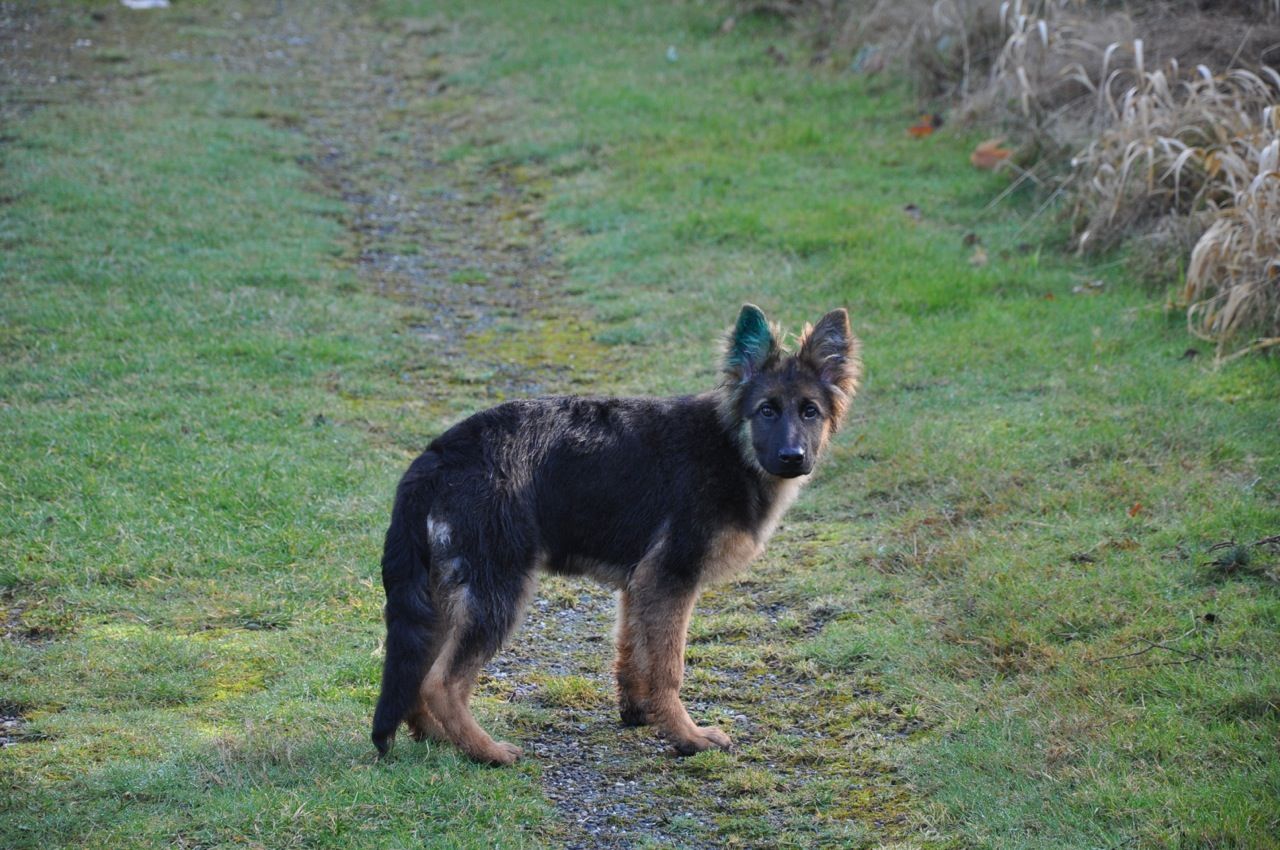 Kipling is very long and lean and eats a pound and a half of Common Sense raw food, beef or chicken, each day. Besides the chicken each package contains carrots, flax, squash, and other nutrients. Common Sense is a business right over the border in Canada, and the testing by the USA to get it into our country is supposedly better than the FDA testing for our own human foods that cross the border. Kind of scary if you think about it. 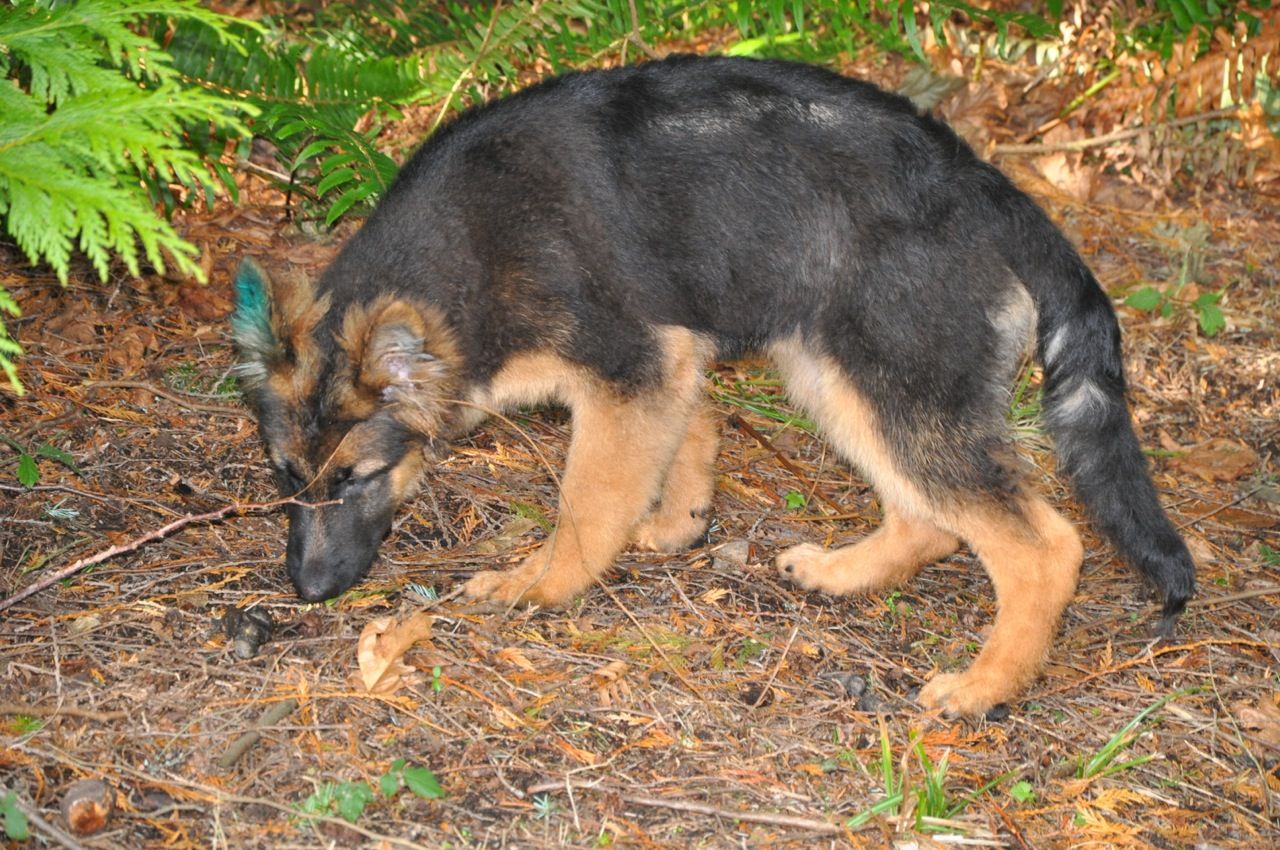 The sun came out this afternoon, and last week’s snow is a thing of the past. The pond is frozen only at the edges. 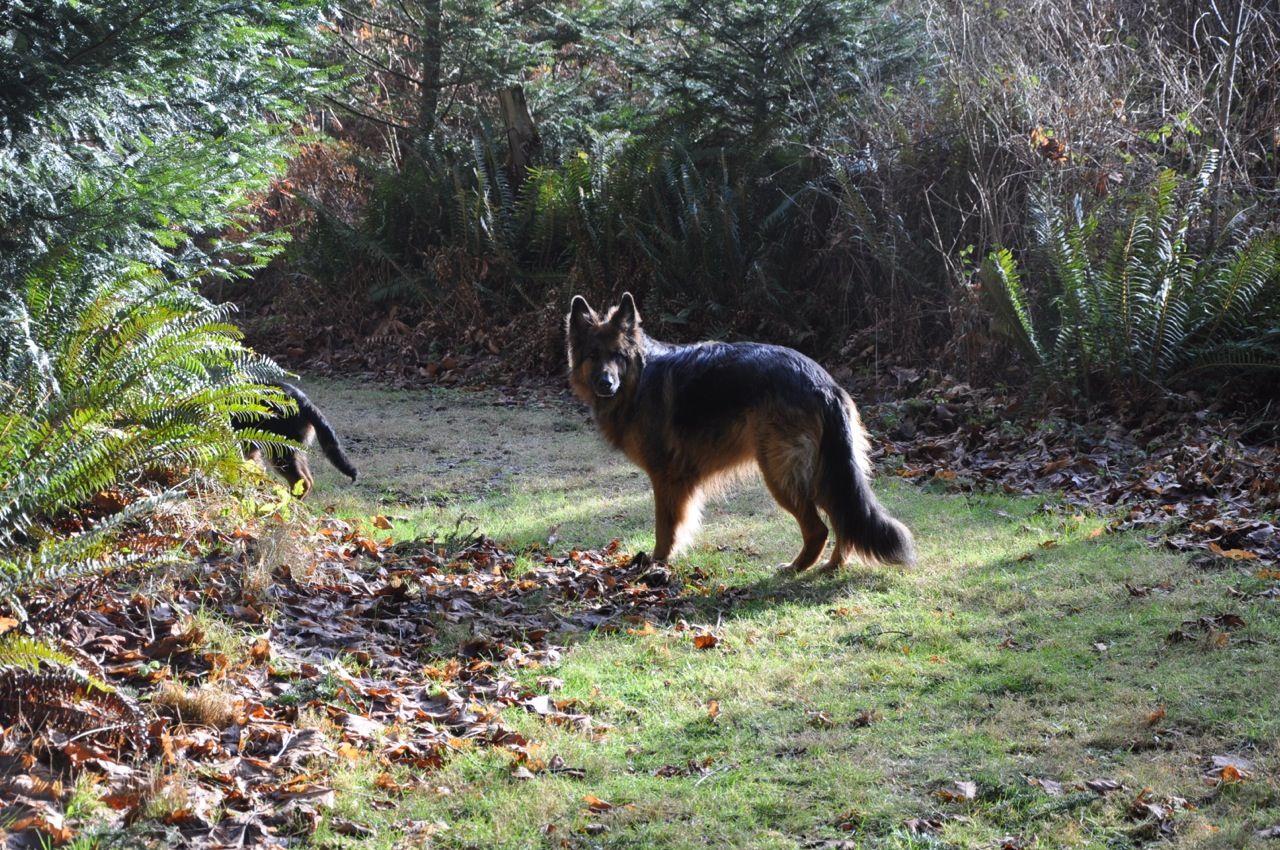 Zippy instructs Kipling on how to patrol the back forest pathways around the lake. Coyotes criss-cross throughout the island and several animals disappear each year. Zippy and Kipling do not roam freely. I am always walking, doing farm chores, lawn mowing, picking up branches, chainsawing fallen trees, clearing debris from the canals, and weeding. Larger chores are for the Bobcat, and Kipling and Zippy both follow behind and make great work dogs. 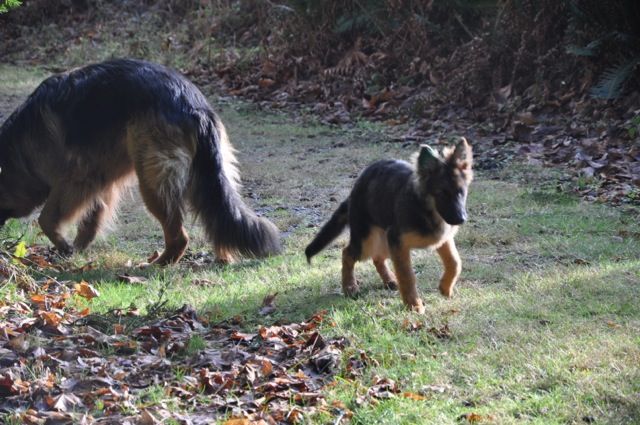 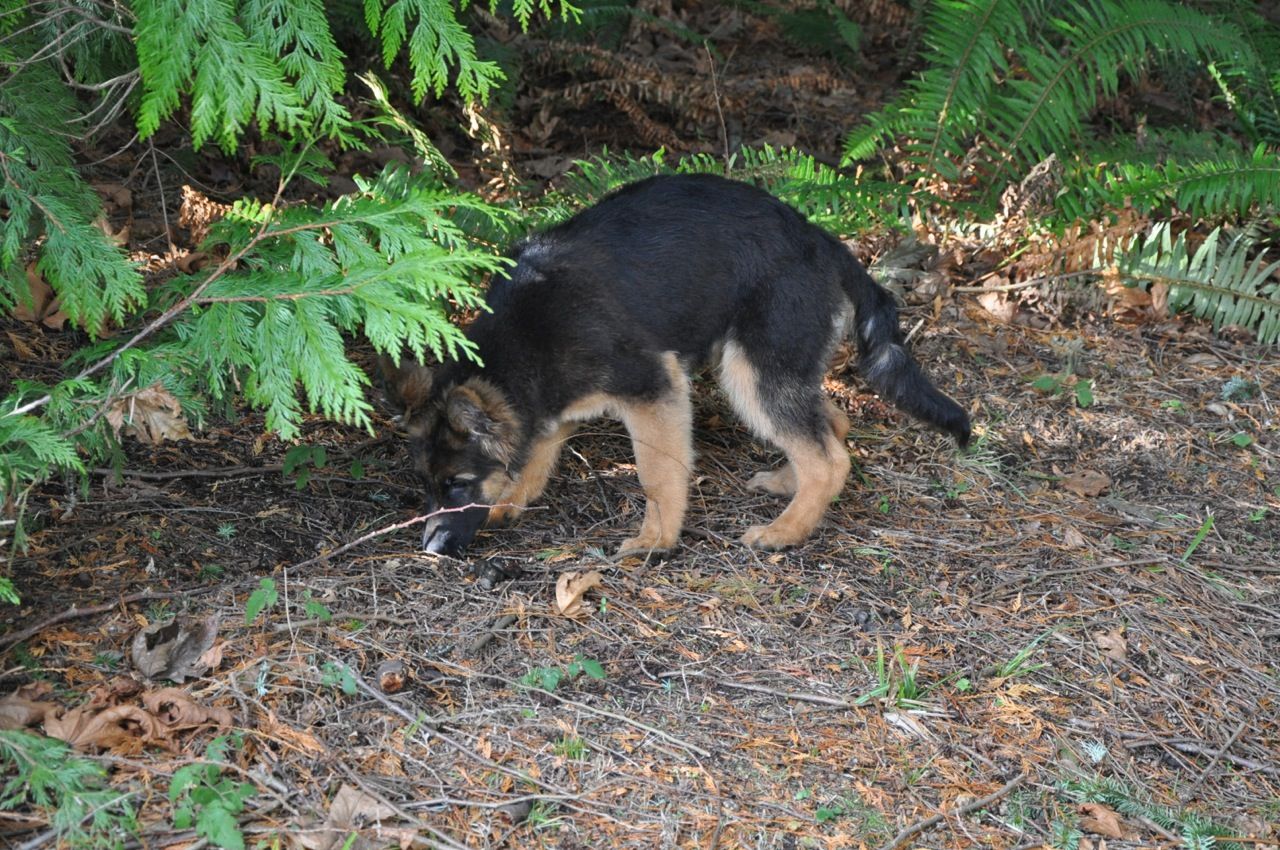 Zippy is a good zen master to Kipling and even allows her to take over the “dog” couch. 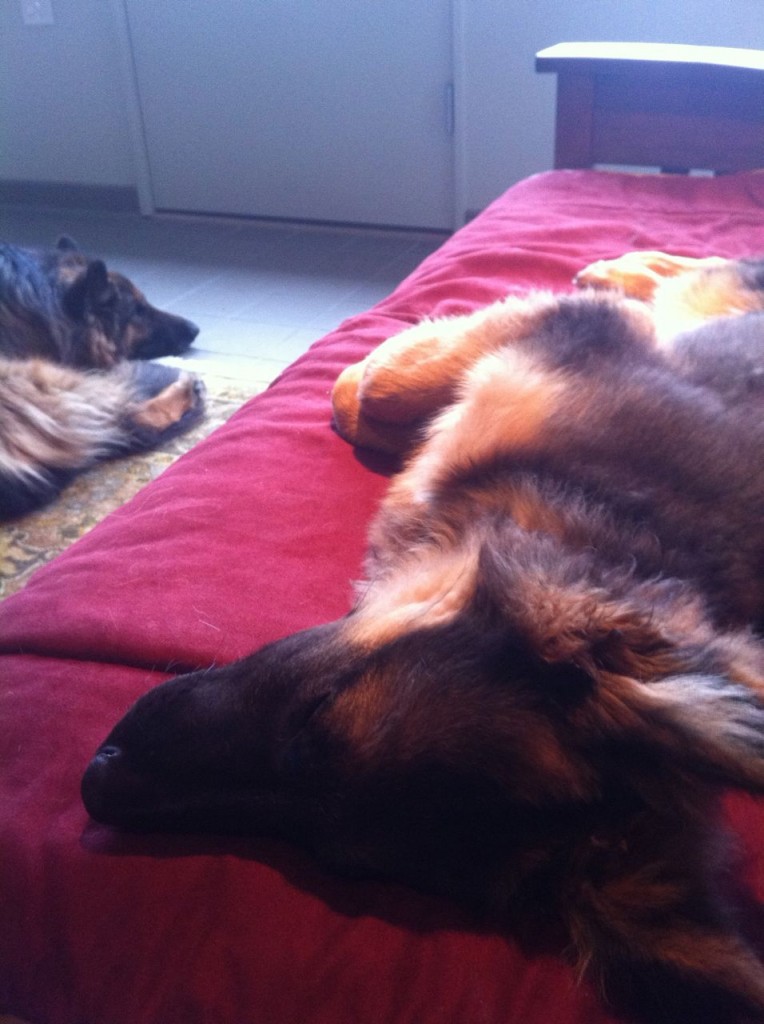 This last shot made me think of some of my father’s Egyptian-inspired paintings . . . the dogs in the tombs. Kipling was a good model. 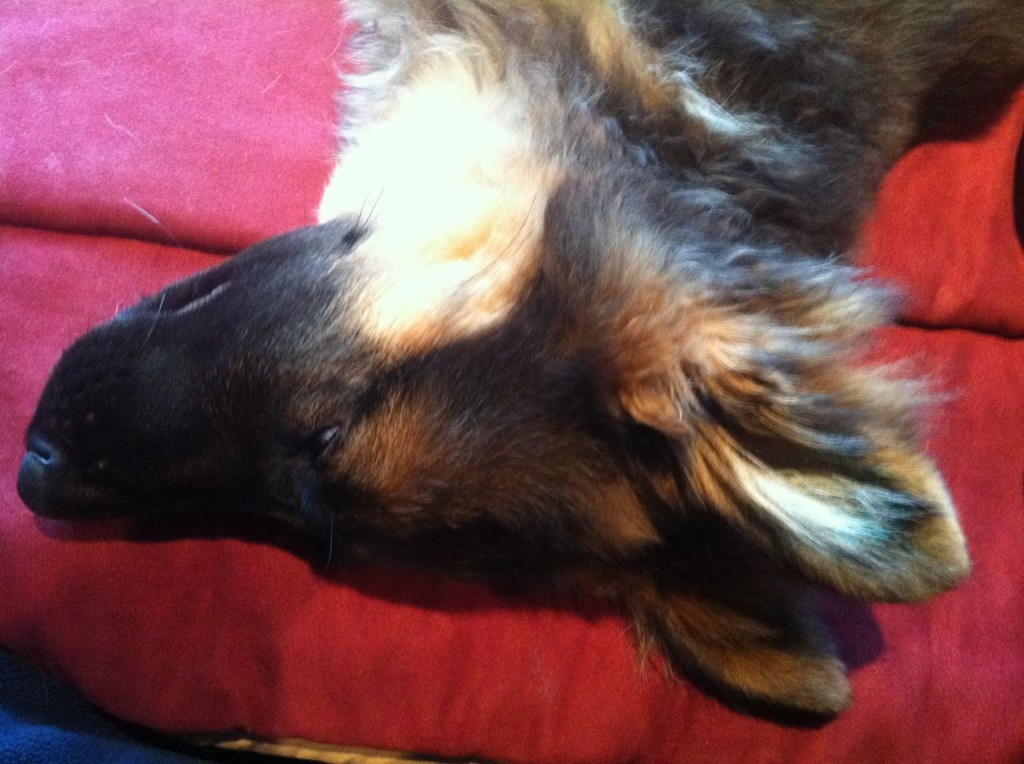 I hope you and your family, whether you have pets to take care of or not, are gearing up for great things this week. I’ve been listening to the next great album by The Roots, Undun, and it is one of their best, right up there with their masterwork, Phrenology. Even if you don’t listen to hip hop you should give Undun a listen. It is a concept album; the songs relate to each other in a natural way, and the melodic tone is deeply inviting and meditational.

My next books to recommend on the horizon are The Vices by Lawrence Douglas and Mr. Fox by Helen Oyeyemi, if you want to start reading.

P.S. With Oscar nominations out, updated, here are the Movies to catch up on for next month’s Oscars: The Tree of Life, The Descendants, The Help, The Artist, Moneyball, Hugo, Beginners, A Better Life, Albert Nobbs, A Separation, Bridesmaids, The Girl With The Dragon Tattoo, Extremely Loud and Incredibly Close, Warrior, The Ides of March, Iron Lady, War Horse, Anonymous, Jane Eyre, W.E., My Week with Marilyn, Hell and Back Again, If a Tree Falls: A Story of the Earth Liberation Front, Paradise Lost 3: Purgatory, Bullhead, Margin Call, The Muppets, Rio, Drive, Transformers: Dark of the Moon, Footnote, In Darkness, Monsieur Lazhar, The Adventures of Tintin, Pina, Undefeated, Harry Potter and the Deathly Hallows Part 2, Real Steel, Rise of the Planet of the Apes, & Tinker Tailor Soldier Spy, — A Cat in Paris, Chico & Rita, Kung Fu Panda 2, Puss in Boots, Rango (the last 5 films are nominated for best Animated Feature Film).

There are 9 movies up for Best Picture this year, based on 5% of the voting block placing that film first as their favorite. Within this complete list of feature-length films that garnered a nomination in any of the categories, are the nominations for Best Foreign and Best Documentary Films. I want to see them when they become available.