You are here:
Journal

A truly inspiring writer, humanitarian, and master politician died today.
Vaclav Havel, a former dissident playwright, was the revered first president of Czechoslovakia (which later became the Czech Republic) after it overthrew Communist rule — 1989’s “Velvet Revolution”. After Slovakia split away, Havel served as President of the Czech Republic from 1993-2003. 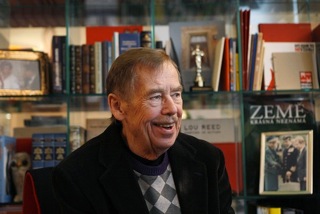 “May truth and love triumph over lies and hatred.”

He was awarded the U.S. Presidential Medal of Freedom from President George W. Bush, who called Havel, “one of liberty’s great heroes.”

Havel was a playwright who used the only weapon he knew: powerfully chosen words; he took on dictators, who feared his writing so much it was deemed to be a crime to produce his plays and forbidden to even publish his photograph.

My Writing Room #LifeBooksWriting
May 6, 2016